6th December is the Feast Day of Saint Nicholas, also known as Nicholas of Bari and the saint who inspired the figure of Father Christmas or Santa Claus.

Patron saint of children and sailors, among others, Saint Nicholas’s generosity and kindness is the origin of the gift giving tradition at Christmas time.

While there is very little known about him, it is believed that Saint Nicholas was a bishop of Greek origin who lived in the 4th century in Myra, in modern day Demre, in Turkey. 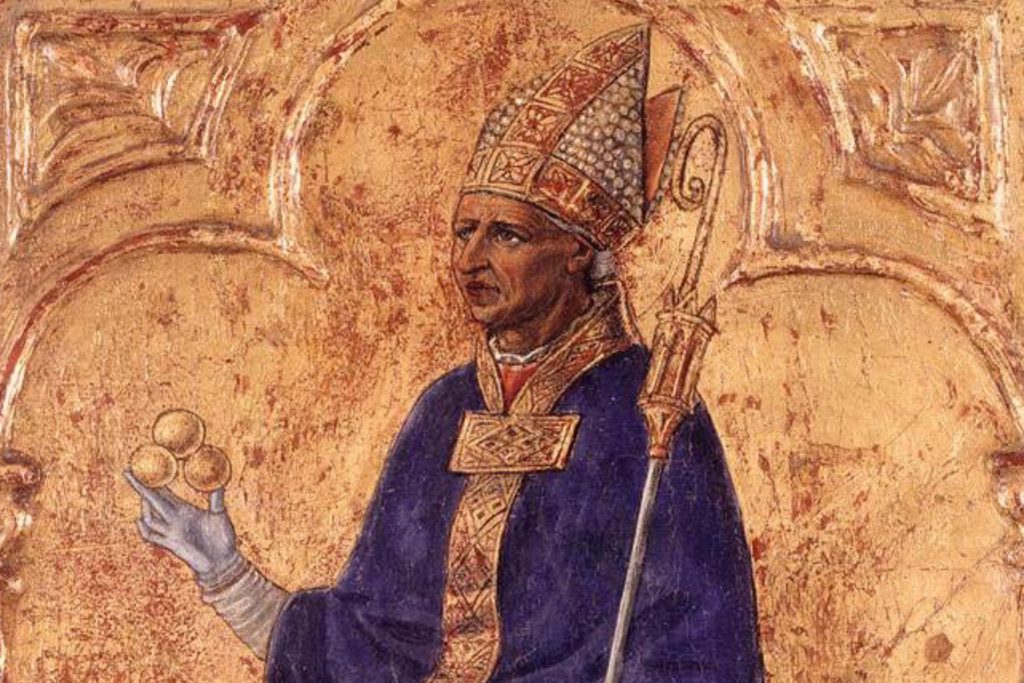 It is believed that after his parents died, he distributed all their wealth among the poor, and many other good deeds and miracles are attributed to him.

The first documents mentioning Saint Nicholas date from the 6th century, nearly two centuries after his death and show the cult of Saint Nicholas was already quite widespread.

Many stories and legends about his life and generosity have originated over time, keeping alive his legacy as a benefactor of those in need and making him one of the most famous and widely revered saints.

The Feast of Saint Nicholas 6th of December, is widely celebrated across Europe. It is also the patron saint of Russia and Greece.

In Germany, children leave their shoes by the front door or the chimney on the night of 5th December so Saint Nicholas, Nikolaus, can leave them little gifts and sweets.

In the Netherlands and Belgium, Saint Nicholas came by boat from Spain and would ride a white horse. Dutch children leave carrots and hay for the saint’s horse in exchange for little gifts.

The Dutch gift giving tradition of ‘Sinterklass’ travelled with immigrants from Europe to New Amsterdam, today’s Manhattan in New York; and from there the tradition of Santa Claus and legacy of Saint Nicholas eventually became the worldwide phenomenon that is today.

200 years after his death, a church dedicated to Saint Nicholas was built on the same site of the church where he was bishop in Myra; and his remains were kept in a sarcophagus in the church.

However, the main relics of Saint Nicholas are located in a crypt at the Basilica di San Nicola, in the city of Bari in Puglia since 1087, when they were stolen by Italian merchants.

The relics were moved after Myra fell under the control of the Muslim Seljuk Turks.

The motivation behind it was spiritual as the Italians worried the shrine would be deconsecrated but was also possibly driven by a desire to bring pilgrims to their cities, as the tomb of Saint Nicholas in Myra was a very popular pilgrimage destination that attracted many pilgrims.

The crypt was completed in 1089 and was consecrated by Pope Urban II who laid the relics of Saint Nicholas beneath the crypt’s altar. The shrine would become one of the most important pilgrimage destinations in medieval Europe, although the magnificent Basilica di San Nicola wouldn’t be fully complete until the mid-12th century.

The Basilica di San Nicola remains an important place of pilgrimage today for Catholics but also for Orthodox Christians.

There are further relics in Venice, at the San Nicolò al Lido monastery basilica, built in 1044.

For more information about our pilgrimages to Italy or if you would like to organise a group pilgrimage to Italy, contact the Joe Walsh Tours pilgrimages team.