The small town of Fatima in Portugal has been an important place of Catholic pilgrimage since Our Lady appeared to three shepherd children in 1917. Its Sanctuary is visited by millions of pilgrims and tourists each year, we take you on a quick virtual tour of the town, sharing with you 8 things to do and see in Fatima, Portugal: 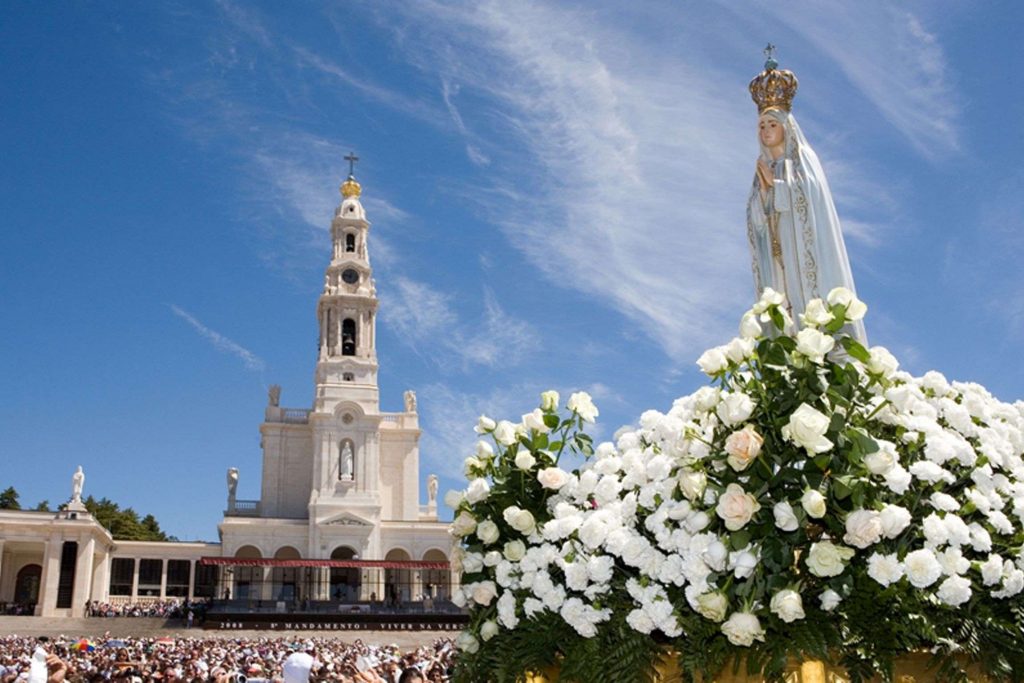 The Sanctuary of Fatima is a complex of shrines and religious monuments that marks and honours the places where these extraordinary events took place in 1917. The Sanctuary is located in the place where the first apparition took place, known as Cova da Iria, and should be the starting point to every visitor and must see in Fatima.

The Sanctuary has an immense square where pilgrims gather on the 13th of each month, as well as two basilicas: the neo-Baroque Basilica of our Lady of the Rosary (Basílica de Nossa Senhora do Rosário in Portuguese) with its 65-metre bell tower, built between 1928 and 1953; and the Basilica of the Holy Trinity (Basílica da Santíssima Trindade), a modern church completed in 2007 with capacity for over 8000 pilgrims, one of the biggest Catholic churches in the world.

This small chapel was the first built in Fatima to mark the place where Our Lady first appeared to three children. It was completed in the 1920s and there is a statue of Our Lady encased in glass on the very spot where the oak tree where she appeared stood.

It has since been enlarged with benches and roof to accommodate the numbers of pilgrims visiting the shrine.

3-The homes of the shepherds

Just a kilometre outside the town, pilgrims can visit the homes of the three shepherds in the village of Aljustrel, now turned into museums.

There you can see the humble home of brother and sister Jacinta and Francisco Marto; as well as the home of their cousin Lúcia de Jesus dos Santos. All the original furniture and items have been preserved and offer a unique insight into life in rural Portugal in the early 20th century.

Francisco and Jacinta both died during the flu epidemic in 1919 and 1920 while their cousin Lúcia survived, became a nun and lived to the age of 97.

You can take the tourist train to the village or walk the Via Sacra.

The Via Sacra route in Fatima follows the path that the three shepherd children took from their home in Aljustrel to Cova da Iria, the site of the first apparition of the Angel and the current location of the Sanctuary.

The path retraces the steps of the children, taking pilgrims through olive and oak groves, stopping at the 14 stations of the cross before reaching the Santo Estêvão Chapel.

One of the most special events to see in Fatima is the striking procession of the candles, taking place each night from Easter time to November (approximately).

The Museum of Sacred Art and Ethnology in Fatima exhibits religious artefacts collected across Portugal, from art and maps to crucifixes and photographs.

7-Walking the Fatima Ways, the Caminho a Fatima

Traditionally pilgrims from all over Portugal would travel by foot or bicycle to the shrine of Fatima and these paths are now being marked and known as The Fátima Ways or Caminos to Fatima.

There are trails from Lisbon, Nazaré, Coimbra and as far as Valença. Some stages coincide with the Camino de Santiago trails to Santiago de Compostela and can be walked in both directions.

Those interested in Geology should definitely visit the ‘Coin Caves’ or Gruta da Moeda. The cave was discovered by hunters in the 1970s and has become a popular attraction in Fatima. The limestone formations in this network of underground galleries and caves have very evocative names such as Virgin, Shepherd, Spring of Tears.

For more information about the Pilgrimage to Fatima in Portugal, to join our upcoming tours to Fatima or to plan your trip contact the travel experts at Joe Walsh Tours Pilgrimages.