Home of saints, Popes and historic shrines, a pilgrimage to Italy is always a joyful and spiritually enriching experience. Today we introduce you to some of the most special and beautiful shrines of Italy: 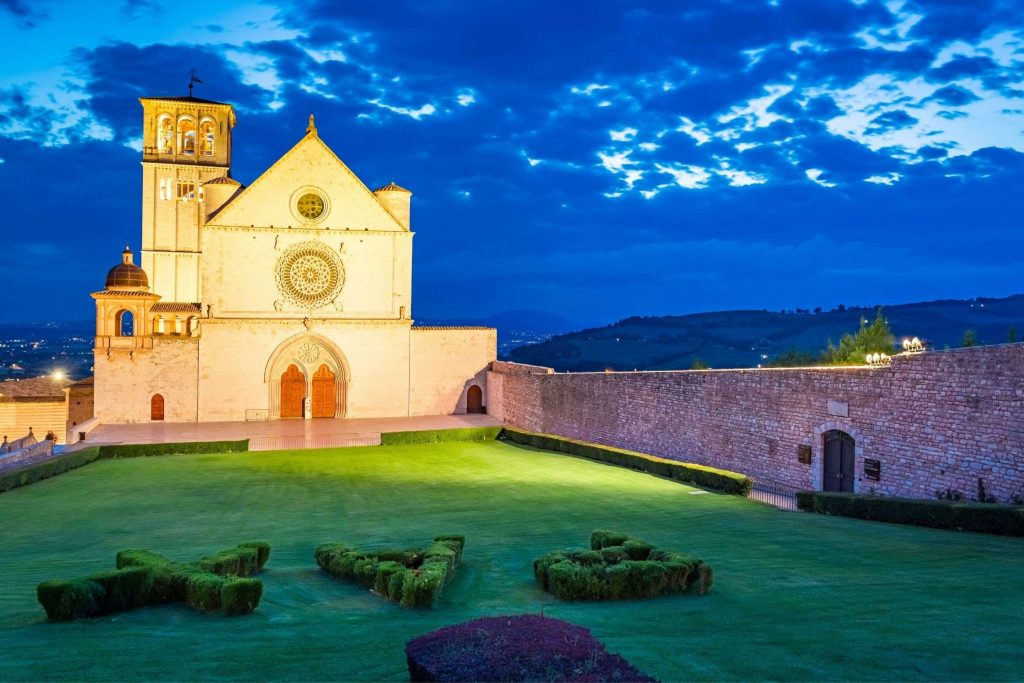 Assisi is an unmissable pilgrimage destination in Italy, a beautiful city-sanctuary on the slopes of Mount Subasio in the region of Umbria.

Pilgrims have been visiting Assisi for hundreds of years to honour the life, work and message of Saint Francis and his disciple Saint Claire.

Both Saint Francis and Saint Claire were born, lived and died in Assisi, where they dedicated their life to their faith and working with the poor. Assisi is also the spiritual centre of the Franciscan Order with its message of peace, as well as the Order of the Poor Claires.

There are many exquisite historic buildings and shrines to visit in this extraordinary historic town, which is also a UNESCO World Heritage Site. The Basilica of San Francesco is dedicated to Saint Francis, while the Basilica of Santa Chiara is dedicated to Saint Claire but there are many other chapels and churches linked to the life and work of both saints, two of the most revered in the Catholic tradition.

ON THE FOOTSTEPS OF PADRE PIO

Bevenvento, Pietrelcina and San Giovanni Rotondo in the South of Italy are the three main shrines and locations related to the life and work of Saint Padre Pio.

The Romanesque Cathedral in Benevento is the place where Padre Pio was ordained; while in his home town of Pietrelcina pilgrims can visit his family home and the Church of Saint Anna where he was baptised and received his First Holy Communion.

It was San Giovanni Rotondo where Saint Pio spent most of his life at the Capuchin Monastery and it was at the Old Church of Santa Maria delle Grazie, Our Lady of Grace, where he received the Stigmata in 1918.

Originally from Lisbon, Saint Anthony was a Franciscan priest who preached in Padua and devoted himself to the poor and sick. He is also known as Saint Anthony of Lisbon.

The Basilica of Saint Anthony in Padua was built in his honour in the 13th century, shortly after his death and quick canonisation, to host devout pilgrims. It is one of the best loved shrines of Italy.

A patron of lost things, pilgrims write and leave messages of requests and gratitude for the Saint at his tomb still today.

As well as leaving a message to Saint Anthony and exploring the lovely old town, pilgrims in Padua, Padova in Italian, can visit the 10th century Basilica di Santa Giustina Benedictine Abbey.

Not far from Padua, the 16th century Sanctuary of Madonna della Corona is one of Italy’s most spectacular shrines for its extraordinary location, built on the side of a cliff. 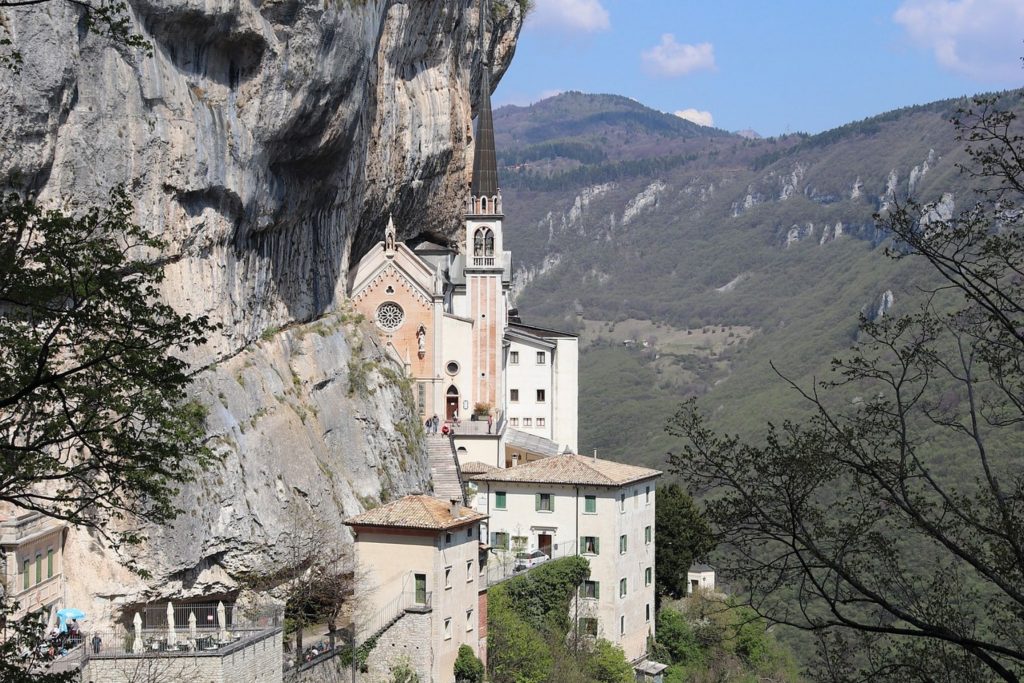 Bari, Puglia’s wonderful capital, is the home of the Basilica di San Nicola, built in the 11th century to host the relics of Saint Nicholas, the saint who inspired the gift-giving tradition at Christmas time.

Saint Nicholas was the Bishop of Myra in Turkey and known for his generosity and kindness to children and those in need. His tomb in Myra became a popular place of pilgrimage but Italian merchants brought his relics from Turkey to Bari in 1087 when the tomb came under threat.

Saint Nicholas inspired the old Dutch custom of Sinterklass coming down the chimney and bringing gifts for the children on December 6th. This custom spread across the world and it’s the origin of the tradition of Father Christmas or Santa Claus.

The Basilica of Saint Nicholas has been an important place of pilgrimage for many centuries, particularly for Catholic and Orthodox devotees, hence the two altars at the crypt where both religions coexist.

MONTE SANT’ ANGELO AND THE CAVE OF SAINT MICHAEL

Monte Sant’ Angelo is one of Italy’s oldest pilgrimage sites and a long list of Saints and Popes have visited Saint Michael’s Cave since the Archangel Michael appeared in the 5th century.

Saint Francis, Saint Pio and Saint John Paul II are among the pilgrims that have made their journey to Monte Sant’ Angelo. 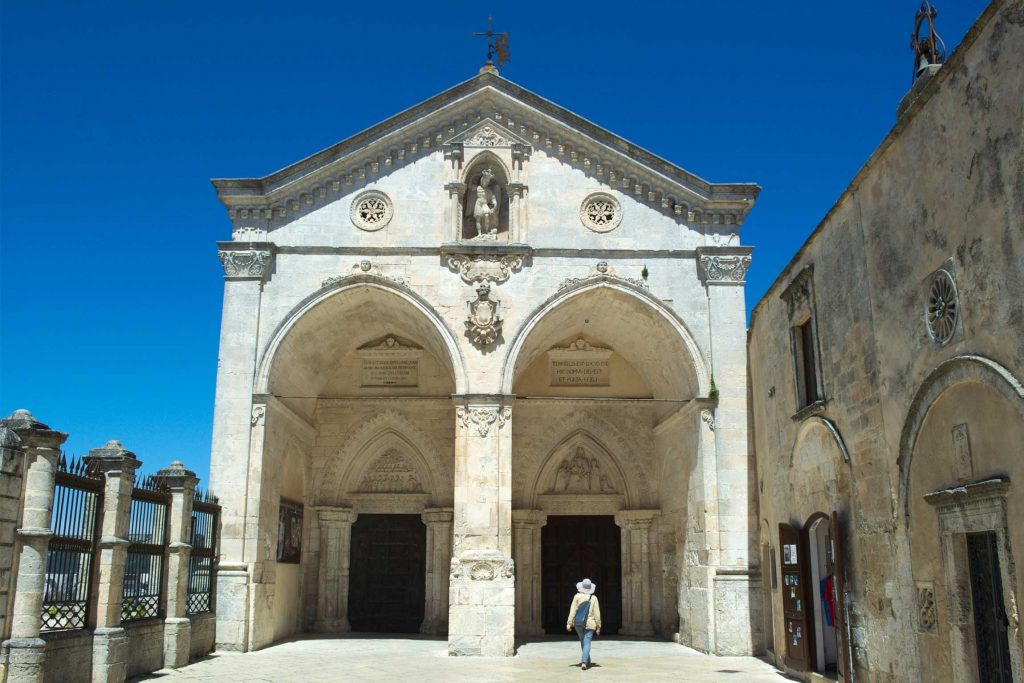 Loreto is home to the Shrine of the Holy House in the Basilica della Casa Santa, which contains three sides of the house where Mary lived at the time of the Annunciation, encased in marble.

The fourth side of the Holy House is still in Nazareth.

The small town of Lanciano, near the Adriatic Coast, is another wonderful place of pilgrimage, as this shrine is the location of the first and greatest Eucharistic Miracle of the Catholic Church.

The Eucharistic Miracle took place in the 8th century as a response to a priest’s doubt about the Real Presence of Christ in the Eucharistic: As he was celebrating mass the Host and wine turned into real flesh and blood.

Pilgrims have travelled to the Sanctuary in Lanciano since then to see the miracle, which is kept in a silver and glass reliquary.

Along with the Holy Land and Santiago de Compostela, Rome is a historic pilgrimage destination for the faithful and a place where spirituality gets renewed with each visit, no matter how many times you visit.

Rome and the Vatican City are the cradle of Catholic faith and some of the most important places of devotion in the Catholic tradition are found here, including the magnificent Saint Peter’s Square and Basilica, official residence of the Pope.

These beautiful and unmissable shrines of Italy can be visited as part of our Pilgrimage to Italy tours and our Great Pilgrimages of Europe collection.

We hope you have enjoyed learning about some of these beautiful shrines of Italy and wonderful places of pilgrimage. If you would like to organise a pilgrimage to Italy for your group or join our upcoming pilgrimage tours, contact our knowledgeable travel team at Joe Walsh Tours Pilgrimages.