A pilgrimage is generally considered a journey undertaken to a sacred or holy place, as pilgrims embark on this special journey for spiritual reasons.

While the exact origins of pilgrimage are difficult to establish, it has been an important ritual part of many of the world’s religions and cultures for centuries, from Christianity and Judaism to Islam, Buddhism or Shintoism. 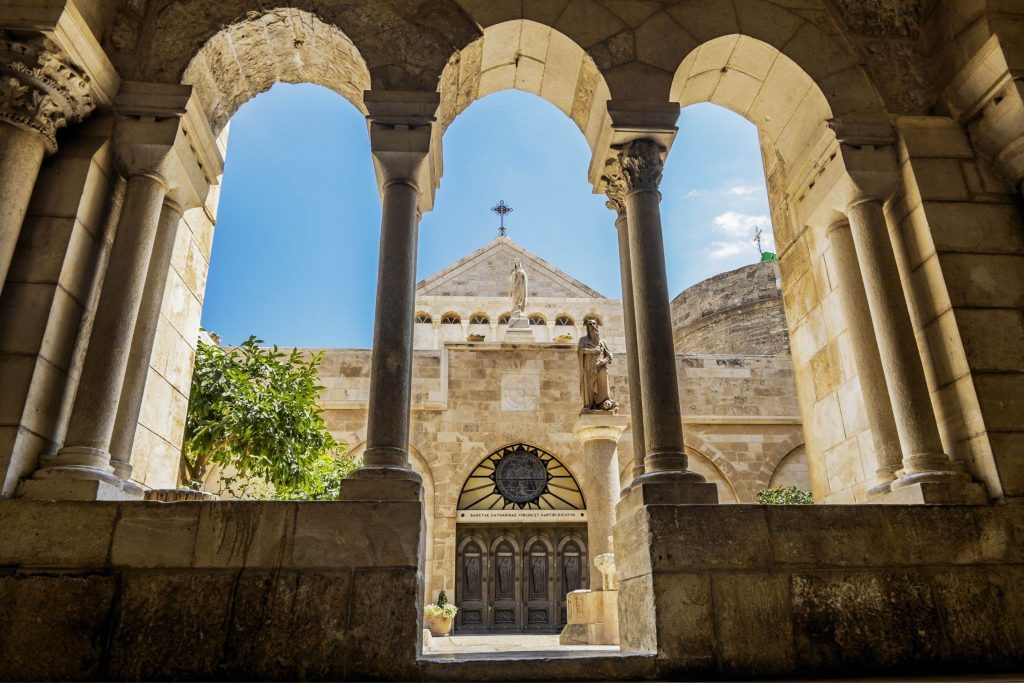 In the case of Christian pilgrims, many examples of physical journeys are depicted in the Bible, for instance. Traditionally, Christian pilgrims travel to places related to the life and passion of Christ, as well as locations of significance in the lives of Saints, to honour relics or tombs, or to visit the place of a miracle.

The purpose of their journey is generally to renew their faith, to fulfill a vow, to atone for their sins, to thank God or a Saint for a cure or even to request divine help with illness and other hardships.

Jerusalem and the Holy Land, the Vatican in Rome and Santiago de Compostela are the main three destinations for Christian pilgrims; however there are many other pilgrimage sites, such as the Marian shrines of Lourdes and Fatima, or Loreto in Italy.

Pilgrimage across Europe can even be considered one of the first forms of travel and tourism. The movement of pilgrims facilitated cultural exchanges and the dissemination of ideas, as well as having a positive effect on local economies and contributing to the development of towns, cities and their infrastructure.

The Camino de Santiago routes, for instance, gained UNESCO status for the important role they played as paths of cultural exchange and interaction. Many hospitals, bridges, forts and even whole cities on the Camino routes developed over time to host and protect pilgrims on their way to Santiago.

“The Route of Santiago has been a meeting place for its pilgrims ever since it emerged some eleven centuries ago. It has facilitated a constant cultural dialogue between the pilgrims and the communities through which they pass. It was also an important commercial axis and conduit for the dissemination of knowledge, supporting economic and social development along its itineraries. “ – UNESCO

The Middle Ages from the 11th to the 16th century approximately, marked the Golden Age of Christian pilgrimage. The Codex Calixtinus, considered the first Camino de Santiago guidebook, was written by French cleric Aymeric Picaud in the 12th century for instance with the aim of sharing advice and guiding pilgrims on the route to Santiago.

These medieval pilgrimages were a big endeavour and an arduous journey in many cases, with pilgrims travelling for long periods of time in foreign lands, and in many cases encountering many dangers and obstacles.

What does pilgrimage involve today?

The tradition of pilgrimage has had its ups and downs over the centuries, due to political turmoil and conflicts, however this practice has survived to this day.

It is fair to say travel for modern pilgrims is a much easier and enjoyable experience. The modern concept of pilgrimage also embraces a wider idea of spirituality, being an inclusive experience, flexible and open to all, regardless of creed, faith or background.

“Pilgrimage is time set apart from normal daily life in which people travel to a holy place,” according to the Pilgrims Office in Santiago de Compostela.

“Pilgrims on the way to Santiago have the opportunity for personal reflection and prayer as well as enjoying the fellowship of other pilgrims from many different countries. The pilgrimage is an opportunity for spiritual renewal and growth in personal faith.”

Like in the 17th century novel The Pilgrim’s Progress; a pilgrim’s journey is physical as well as deeply personal. Pilgrims not only travel to a place but also embark on their own inner journey of transformation, or at least that is the intention.

What does it mean to go on a pilgrimage for you? Let us know, we would love to know about your experience.

For information about pilgrim tours or assistance organising a group, contact our Pilgrimage travel experts at Joe Walsh Tours.

The town of Lourdes in France is known the world over as a pilgrimage destination, today we introduce you to 11 interesting facts about Lourdes you might not know about
Read More

8 Things to do and see in Fatima, Portugal

The small town of Fatima in Portugal has been an important place of Catholic pilgrimage since Our Lady appeared to three shepherd children in 1917. Its Sanctuary is visited by
Read More
We use cookies on our website to give you the most relevant experience by remembering your preferences and repeat visits. By clicking “Accept”, you consent to the use of ALL the cookies. However you may visit Cookie Settings to provide a controlled consent.
Cookie settingsACCEPT
Privacy & Cookies Policy