Fatima, in Portugal, is one of the most popular pilgrimage destinations, receiving millions of pilgrims and visitors each year.

If you’re spending more than just a brief time in the area, here are 7 great day trips from Fatima you should consider exploring:

Lisbon, is Portugal’s capital and its largest city, with more than 500.000 inhabitants. Lisbon has a rich history and has been a major crossroad for many civilizations and cultures, including Phoenicians, Greeks, Carthaginians, Romans, and Moors.

Lisbon’s important maritime power arose during the 15th century, and it was also a popular destination for traders during the Age of Discovery when the explorer Vasco da Gama discovered the sea route to India.

During the visit to this historical city, pilgrims will discover Lisbon’s many attractions like the Unesco World Heritage Site “Jerónimos Monastery”, a 16th-century monastery; magnificent churches like “Basílica da Estrela”; and inspiring street art and murals. 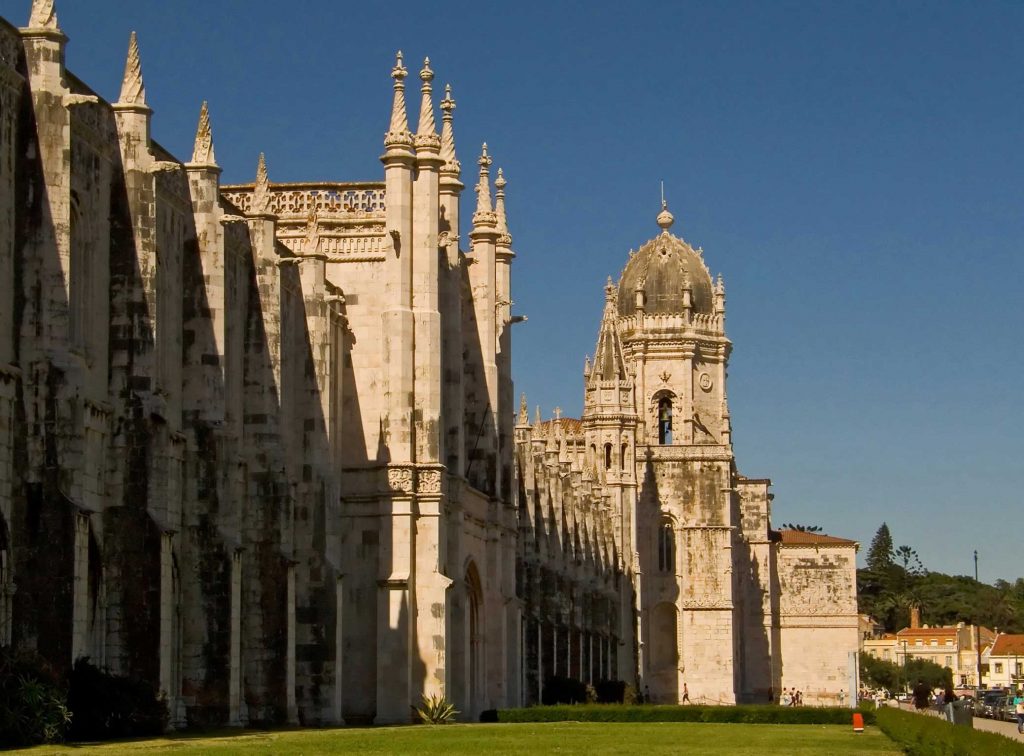 Located only 45 min from Fatima by bus, Santarém is a city in Portugal, known for its rich architecture and cultural heritage. Santarém stands on the top of a plateau, formed by seven hills and overlooking the Tagus River.

The city has its origins in the Roman age, with its current Roman name being “Scalabis”. It was taken in 1147 by the first king of Portugal, D. Afonso Henriques. This time was also an important period for the Christian reconquest as in this year Lisbon was conquered by the same king.

In Santarém, Pilgrims will find “Portas do Sol Gardens”, a garden with two famous medieval doors, that during the 12th century was one of the leading gates to the city of Santarém. From here pilgrims will be able to admire incredible views of this beautiful city and the Tagus River.

In addition to the fantastic Portas do Sol Gardens, you should not miss visiting Santarem Cathedral, a 17th-century church dedicated to Our Lady of the Conception that was upraised as a cathedral with the creation of the Diocese of Santarém.

The city of Braga is one of the oldest in Portugal, in fact, it was founded 2,000 years ago by the Romans; nevertheless, it is a city that hosts many university students.

We strongly advise a stroll through its old centre where you’ll be able to see beautiful houses, many churches and historical buildings.

Braga’s diocese is the oldest in the entire country and in the Middle Ages actually competed with the city of Santiago de Compostela in power and importance.

As well as the diocese, even the cathedral is the oldest one in Portugal and was built in the 12th century by the parents of the first Portuguese King, who are buried there.

Obviously, you can’t miss a visit to the Bom Jesus Sanctuary, a monument made as a staircase leading to a church, which signifies the faithful  pilgrim as he passes every station of the cross in deep contemplation.

After visiting the beautiful city of Braga, you should definitely head south and stop by Porto, a vibrant city on the Portuguese coast overlooking the Atlantic Ocean.

The Douro River divides the city in half and is crossed by six lovely bridges. The river is even more beautiful if seen from another perspective: you can experience a boat tour departing from the Riviera district, full of colorful houses and narrow streets.

This wonderful city is also full of baroque churches, one being the Sé cathedral, located in the city centre and one of the oldest and most important monuments of Porto.

The city of Coimbra is mainly known for its UNESCO University, the oldest in Portugal and one of the oldest in Europe. This is why it is also called the city of students, as well as Braga being considered the youngest due to its vibrant city life.

Where the first kings of Portugal once lived, you can now visit beautiful palaces, such as the late gothic Chapel of São Miguel, with its imposing baroque organ.

This chapel was built in the 12th century and was then acquired by the University from the Royal Family in 1597, while still retaining royal privilege.

In Coimbra’s historical centre, visitors mustn’t miss the Monastery of Santa Cruz, which houses the tomb of the first King of Portugal, Afonso Henriques.

Also, on the other bank of the Mondego River, there are the 14th century ruins of the Monasteries of Santa Clara-a-Velha and Santa Clara-a-Nova, recovered and rescued from the waters of the river that invaded them over the centuries.

Not far from Fatima, there is the beautiful town of Nazaré, located in the West region of Portugal.

Nazaré is famous for its beach, and fishing traditions. In fact and due to the “Nazaré Canyon”, it is said that the largest waves in the world can be found here.

One of the main tourist attractions for visitors is Sitio, a neighborhood in Nazaré, where pilgrims will enjoy the best views of the Portuguese Coast throughout its fantastic funicular.

In Sitio, pilgrims will have the opportunity to admire the marvelous “Ermida de Memória”, a small chapel connected to the legend of Our Lady of Nazaré, which is said to have saved the life of the “commander of a fortress” when he was about to fall down to a precipice.

One more important Marian shrine to see during your visit to Nazaré is the Shrine of Our Lady of Nazaré, a 17th-century monument, that was built to house the many pilgrims that visit this holy shrine.

Estoril, a distinguished seaside town in Portugal, is part of our very special pilgrimage and coast tours on the Portuguese Riviera.

Estoril is known for being a popular tourist destination since the 1930s, and it was also a place of refuge for many aristocrats.

The town is also a fantastic place for visitors that wish to relax and enjoy a stroll along the beautiful coastline of Estoril.

Not only Estoril is famous for its fantastic beach and resort, but also this alluring town is well known for its rich history, including the forts throughout the coast to protect the city, its fishing traditions, and its past thermal waters.

We hope you enjoy our suggestions on our day trips from Fatima. For more information about our Pilgrimage to Fatima : HERE