Caroline, who leads our team in Lourdes, shares the history of Betharram an important place of pilgrimage and place of a miracle of Our Lady.

While in Lourdes pilgrims might like to visit the Shrine of Betharram, 15kms downstream from Lourdes and an old place of pilgrimage to Our Lady in the foothills of the Pyrenees.

Local history records this crossing place over the River Gave de Pau as a place of pilgrimage to Our Lady since at least the 15th century.

Before this it was a crossing place and stop for pilgrims following the Way of St James, the Camino. The early bridges were wooden but were often washed away by the flood waters of the Gave.

With the increasing numbers of pilgrims to the shrine in the 17th century the stone bridge that we can still see today was built between 1681 and 1687. 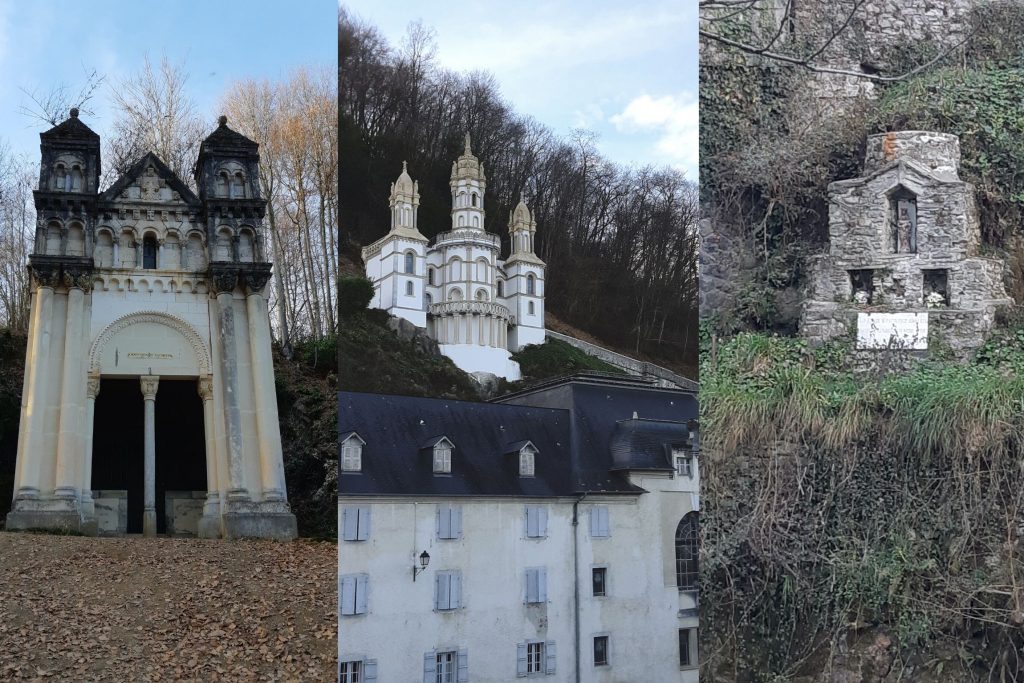 In fact it was due to a miraculous intervention of Our Lady in the 17th century that the Shrine became known as “Betharram” a word that comes from the local Bearnais dialect meaning “beautiful branch” .

A young girl fell into the River Gave and was drowning when she was saved by the Blessed Virgin holding out a ‘beautiful branch’ to her. This event gave its name to the already well known pilgrimage site. There is a small statue on the river bank depicting a young girl holding out her arms (in the direction of the Sanctuary).

The Church that we see today was built in the 17th century in the aftermath of the miracle and to replace the original, smaller church that had been destroyed during the religious wars when this region was under Protestant control in the 16th century.

The Church is built in classic style and very richly decorated with large paintings depicting the life of Christ in 17th century style. (seen as a living bible). Many churches were very richly decorated at the time to oppose the austerity of the reformed churches. On the main altar the statue of Our Lady of Betharram by Renoir dates from the 19th century and there are several statues that were saved from the old church.

Religious communities have been present here for several hundred years welcoming pilgrims. In the 19th century Basque priest Saint Michael Garicoits (1797-1863) founded the Fathers of the Sacred Heart of Jesus (of Betharram) and developed the school and seminary here. The size of the buildings along the bank of the river are witness to the success of the site in the past.
Fr Garicoits played a major role in the restoration and reputation of Betharram. Following his beautification in 1923 an art deco style chapel was built behind the main altar to hold his relics.

The Saint of Betharram, Michael Garicoits, founded his spirituality on “Ecce venio”: “here I am Lord, I come to do your will”. He was a spiritual adviser to Bernadette following the Apparitions and was amongst the first to believe her.

The Stations of the Cross on the hill of Betharram were built on the instructions of Fr. Garicoits and his successors replaced the old calvary. They are currently being restored and are classed as historical monuments.

In front of the church we can see the statue of St. Roch, very popular particularly in the south of France and honoured in many churches in this region.

He was born in Montpellier and died in Venice in the 14th century. He is depicted dressed as a pilgrim accompanied by a dog. Patron saint of pilgrims, he was and still is invoked for protection from contagious diseases, epidemics and natural disasters and so many villages honoured him with a statue in or outside the churches or on the village square or fountain.

It was quite appropriate to have a statue of St. Roch patron saint of pilgrims in front of the Sanctuary Church of Betharram being as it was/is a place of pilgrimage.

When in Lourdes you can see the Carrera marble statue of St. Roch to the left of the path leading from Rosary Square to the Crypt and Upper Basilica, a gift from Montpellier Diocese in 1913.

Appropriate at this time of the global pandemic to invoke St. Roch’s protection. Enjoy your time in Betharram, in the footsteps of so many other pilgrims through the centuries.

You can find details about our upcoming pilgrimage tours to Lourdes here: PILGRIMAGE TO LOURDES.