“All the darkness in the world cannot extinguish the light of a single candle.” – Saint Francis of Assisi

As part of our popular pilgrimage to Italy, there is a stop in Assisi, a spiritual place of pilgrimage and one of the most stunning medieval towns in Italy.

Assisi is also known for being the homeplace of Saint Francis, a very important religious figure of the Catholic Church, founder of the Franciscan orders of the Friars Minors, the women’s Order of St. Clare, and the lay Third Order. He was also declared the Patron Saint of Ecology in 1979 by Pope John Paul II.

Saint Francis of Assisi and St. Catherine of Siena are the patron saints of Italy. 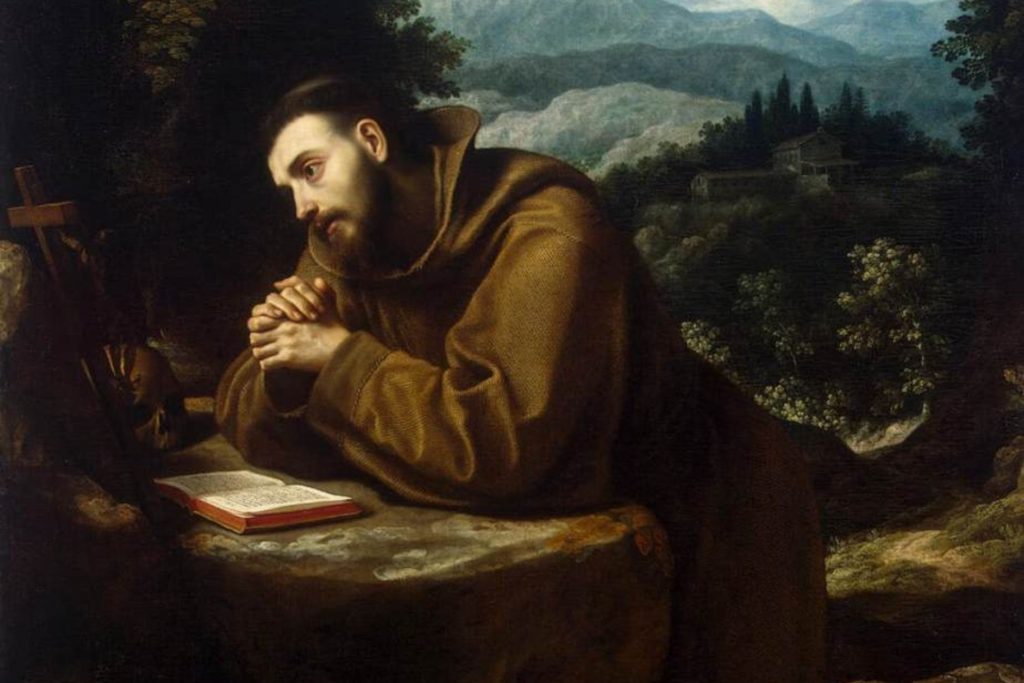 Born in the 12th century in Assisi, a region in Umbria, Italy, it is believed that Saint Francis came from a wealthy family, living a wealthy lifestyle during his youth, according to Thomas of Celano, his first biographer.

Moving by the ambition to become a knight and a noble, Francis joined a battle against the Perugians, however, the Assisians were defeated and Francis spent one year in prison, where he contracted a long illness.

Once released from prison and recovered from illness, he attempted to join battle against the emperor Frederick II, however while sleeping Francis had a vision during which he was told to return to Assisi which he of course did.

Many legends talk about the growth of Saint Francis to a life devoted to Christianity, including his encounter with an ill man while out horse riding.

Soon after, the Saint began receiving messages from God, who asked Francis to repair the Christian Church. It was then that Francis abandoned his earlier wealthy life to live a life in poverty.

The Saint offered his possessions to the people in need and did not accept any money. It is even said that Francis used to wear a humble tunic with a rope and three knots as a symbol of poverty. He is also known for his love for animals and nature.

As he began preaching in Assisi, following the Gospel, he was followed by many disciples who listened to Francis’ lessons and wanted to live a life devoted to God and poverty, known as the Franciscan Friars.

In 1224, he received the Stigmata of Christ, being the first person to receive it. Francis died on October 1226 in Portiuncula, and he was canonized by Pope Gregory IX in 1228.

Visitors and pilgrims can find the remains of Saint Francis in The Basilica of San Francesco or Saint Francis Basilica, located in Assisi and considered one of the most important sanctuaries in the town.

Feast of Saint Francis of Assisi

The feast of Saint Francis is celebrated each year on October 4, commemorating the Saint, and is considered a very important event in the Franciscan calendar.

The feast is celebrated in some countries across the world, including Italy, Canada, and the United States.

For more information about the wonderful town of Assisi, you can read our blog: SPECIAL PLACES TO SEE IN ASSISI